Email Updates Register to receive daily court lists by email soon after they are published. Subscribe Future Listings Find hearing dates & times for all current matters in the FCA and FCC. Go to Federal Law Search
Library Annual Reports SeminarsPapers of seminars & other events held in the Federal Court
Judges' Speeches and Papers Current and former judges, including Welcome and Farewell ceremonies Videos GlossaryGlossary of legal terms
Judgments About the judgments collection, including FAQs
I am a Party -
Information for Litigants
Jury Service
I am a Practitioner I am a witness I have been Subpoenaed
Guides
Online Services
About Us

The Federal Court has participated in or managed international judicial development projects with a number of courts, predominantly, but not exclusively, in the Asia Pacific region. Featured here are some highlights of the Court's collaborations. For further details about these and other projects, contact us.

The Federal Court has collaborated with or implemented activities in the following countries in Asia:

Activities in the Pacific

The Federal Court has collaborated with or implemented activities in the following Pacific Islands countries:

The Federal Court managed the Pacific Judicial Development Programme (PJDP) funded by the New Zealand Ministry of Foreign Affairs and Trade (MFAT). Over five and a half years the program provided regional capacity building assistance to judiciaries in 14 participating Pacific Island countries to enable them to operate as central pillars of good governance and the rule of law. Details on PJDP activities and outcomes can be accessed on the Programme's website.

The Court designed the subsequent project: Pacific Judicial Strengthening Initiative (PJSI), also funded by MFAT. The purpose of the PJSI is to continue to strengthen the capacity of the 14 participating courts, and provide them with the tools to manage their own development locally.

Meeting of the Pacific Chief Justices in Samoa, April 2014

The Federal Court recognises the mutual benefit from collaborating and partnering with other countries through visits and knowledge exchange programs. These programs have been invaluable in facilitating mutual understanding about the court and judicial processes, as well as the roles, functions and responsibilities of judicial and court staff. The Federal Court has hosted visits from judicial and court officers along with representatives of other justice sector institutions from the following countries: 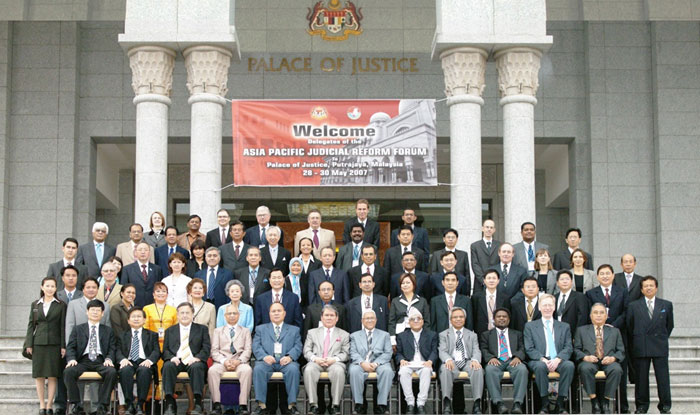 The Court was integral to the creation and evolution of the Asia Pacific Judicial Reform Forum. The Forum is a network of senior courts and justice sector agencies across 49 countries in the region. The Court played a key role in organising the Forum's meetings during its formative years and developing its first publication "Searching for Success: Voices of the Asia Pacific Experience", a collection of reform experiences by judicial officers, lawyers, reform practitioners, educators and academics involved in reform projects across the Asia-Pacific. The project was funded by the United Nations Democracy Fund and managed by the United Nations Development Programme in conjunction with the Forum Secretariat.