Activities in the People's Republic of China

Since 2000, the Court has had a continuing relationship with courts of the People’s Republic of China. In recent years, the Court has hosted a number of visits from groups of Chinese judges and legal professionals. In 2012 the Principal and NSW Registries hosted a delegation from the Shandong Provincial High People’s Court and Intermediate People’s Court with presentations from senior members of the judiciary and NSW Registry. Judges of the Federal Court and court officials have also made visits to China to discuss opportunities for further engagement between the judiciaries and attend conferences related to areas of common jurisdiction. 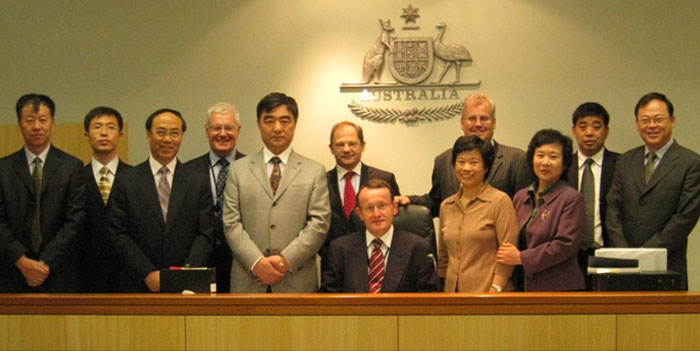 With funding from AusAID, the Federal Court worked closely with the Supreme People’s Court between 2007-8 under the auspices of the China Australia Governance Program to establish and develop an enduring relationship between the courts in substantive including Maritime Law, Competition Law and Labour Law.

Funded by AusAID, the two courts collaborated again during 2010-12 to successfully develop, draft and decree a judicial interpretation of international law to protect China’s waterways. The program involved discussions about legislative, judicial and common law processes in dealing with water pollution and maritime issues. Incorporation of international law into domestic law was emphasised with the aim to fill the ‘gaps’ within Chinese legislation and transform environmental protection across China in accord with international practices. Exchanges between the two courts involved training, presentations and discussions on oil pollution conventions; judicial protection of waters; maritime judicial systems in Australia; public interest litigation over waters; and interpretation of domestic and international maritime law and dispute resolution. As a result of this program, the judicial interpretation was promulgated in 2012 and has since had the force of law across China.