The relationship between the National and Supreme Courts of Papua New Guinea (PNG) and the Federal Court was first established in 2001. In 2009 the first 5 year Memorandum of Understanding (MoU) was signed between the Courts.

Signing of the first Memorandum of Understanding, November 2009

New five-year MoU was signed in 2014 providing a platform for collaboration and cooperation on judicial reform. Activities conducted under this MoU are funded jointly by the Federal Court of Australia and the Supreme and National Courts of PNG. The courts have facilitated numerous visits and knowledge exchanges across the areas of case management, Alternative Dispute Resolution and information technology. In 2015 PNG Registry Teams visited the Victoria, NSW and SA registries. The visits exposed PNG Registry staff to the Court’s electronic case management system and facilitated learning about the functions of Judges and Registrars. The PNG Courts have also engaged the Court’s Technical Services expertise as they progress their Case Management and IT Frameworks. Across all MoU activities, the Court hosted 146 judicial and court staff from PNG. 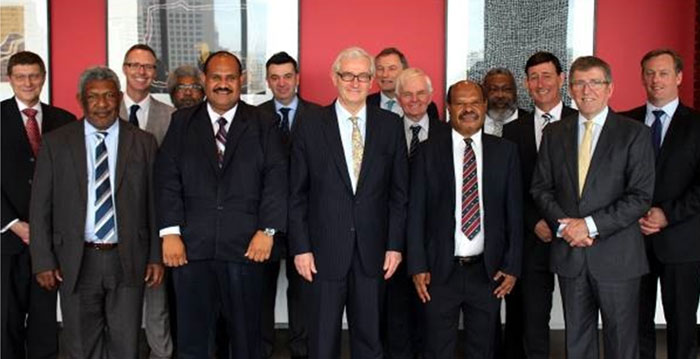 Outside the MoU activities the Court undertook a project focused on improving mediation and case management in the courts of PNG in 2009. The PNG Regulatory Simplification and Investment Policy and Promotion Project, sponsored by the International Finance Corporation, informed PNG’s plan to implement a series of reforms, including court-annexed mediation within the Supreme Court and District Courts of PNG. Since 2005 the courts have conducted eight visits focused on alternative dispute resolution and the Federal Court has worked closely with the Chief Justice and Judges of PNG to develop and support a framework for court-annexed mediation, enhancing the capacity of these Courts to efficiently manage cases.

Papua New Guinea was also involved in the Pacific Judicial Development Program (PJDP) funded by the New Zealand Ministry of Foreign Affairs and Trade (MFAT). Further details of activities run by the PJDP can be found on the Programme’s website.