The Federal  Court’s relationship with Myanmar commenced in 2015 following discussions  between the Chief Justice and the Chief Justice of the Supreme Court of the  Union of Myanmar regarding the road to judicial reform. The two Chief Justices  considered court led initiatives that support public confidence in the  judiciary through accountability and transparency measures. Pursuant to the  discussions, in November 2015 the Federal Court hosted two judicial administrators  from the Office of the Supreme Court of the Union of Myanmar. This DFAT funded  visit provided the opportunity for the visitors to learn about court  administration and judicial processes as the Myanmar judiciary looks to the  implementation of their Strategic Plan 2015-2017.

A historic Memorandum  of Understanding (MoU) was signed in June 2016, strengthening the judicial cooperation and ongoing knowledge exchange between the two courts. 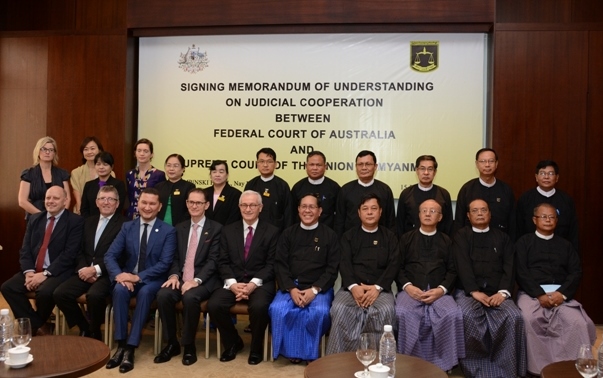