The Federal Court has developed strong ties with the Supreme Court of Tonga, dating back to 1991 when the Court supported the provision of legal resources and training for librarians at the Supreme Court of Tonga. In 2004, under the AusAID funded Pacific Governance Support Program, the Court continued to assist the Supreme Court in improving its court administration and case management systems, contributing to a case backlog reduction. In 2005, under the Interim Regional Judicial Development Program, the Court assisted in conducting training on alternative dispute resolutions, as well as judicial benchbook, evidence and sentencing. In 2009, the Court assisted Tonga in developing its first Magistrate’s Benchbook, with funding from the Commonwealth Secretariat.

The Court extended support to Tonga under the AusAID funded Pacific Judicial Capacity Development Program in 2012 through the Commercial Case Management and Court-Annexed Mediation Workshops attended by Tongan representatives.

A number of activities have been held in Tonga as part of the Pacific Judicial Development Programme (PJDP), including the training-of-trainers, judicial orientation and decision making workshops. In 2013 PJDP conducted a workshop on practices and approaches to interpreting applicable law and dealing with family violence and juvenile cases within a Pacific context, which attracted broader attendance from various government, justice sector and non-government agencies. Further details of activities run by the PJDP can be found on the Programme’s website. 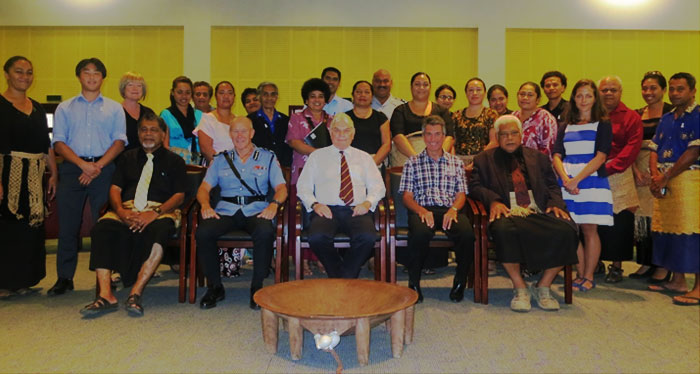 Participants at the Family Violence and Youth Justice workshop in Tonga, 2013