Email Updates Register to receive daily court lists by email soon after they are published. Subscribe Future Listings Find hearing dates & times for all matters before the Federal Court. Go to Federal Law Search
Library Annual Reports SeminarsPapers of seminars & other events held in the Federal Court
Judges' Speeches Including Welcome and Farewell ceremonies Videos GlossaryGlossary of legal terms
Judgments About the judgments collection, including FAQs
I am a Party -
Information for Litigants
Jury Service
I am a Practitioner I am a witness I have been Subpoenaed
Guides
Online Services
About Us

The Federal Court has collaborated with the Supreme Court of Vanuatu since 2000 with the Registrar’s visit to Vanuatu to prepare a report on how the Court could become self-administering, the recommendations of which were later implemented enabling the Supreme Court to become the first self-administering court in the Pacific. The Supreme Court of Vanuatu and the Federal Court of Australia entered into a Memorandum of Understanding (MoU) in 2013. As part of the implementation of the MoU, the Court conducted analysis of the requirements and logistical issues involved in establishing case management procedures and an audit system, and subsequently commenced work to implement the relevant systems. 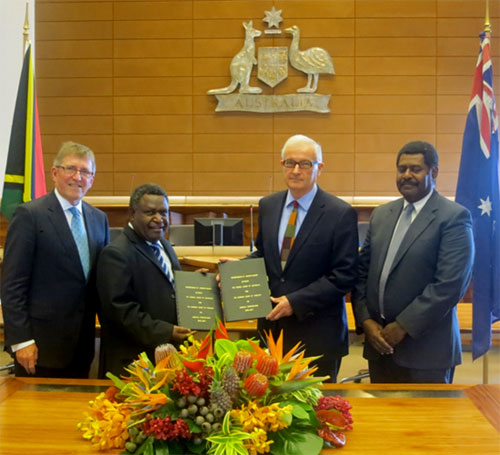 Signing of the Memorandum of Understanding, June 2013

Vanuatu previously participated in the Pacific Islands Law Library Community Twinning Project, as well as the AusAID funded Pacific Regional Mediation Program in 2009, where the Court provided assistance in building skills, systems and processes to support the establishment of a regional network of mediators.

A number of activities have been held in Vanuatu as part of the Pacific Judicial Development Programme (PJDP), including the training-of-trainers, judicial orientation and decision making workshops. In 2013 PJDP conducted a workshop on practices and approaches in dealing with family violence and juvenile cases, which attracted broader attendance from various government, justice sector and non-government agencies. Further details of activities run by the PJDP can be found on the Programme’s website.