Email Updates Register to receive daily court lists by email soon after they are published. Subscribe Future Listings Find hearing dates & times for all matters before the Federal Court. Go to Federal Law Search
Library Annual Reports SeminarsPapers of seminars & other events held in the Federal Court
Judges' Speeches Including Welcome and Farewell ceremonies Videos GlossaryGlossary of legal terms
Judgments About the judgments collection, including FAQs
I am a Party -
Information for Litigants
Jury Service
I am a Practitioner I am a witness I have been Subpoenaed
Guides
Online Services
About Us

Activities by area of expertise - Governance

It is critical in a democracy that the judiciary is impartial and independent of all external pressures. When carrying out their judicial function judges must be free of any improper influence including that arising from the executive or legislature branches of government, individual litigants, pressure groups, the media, self-interest or other judges. This enables the public and those who appear before them to have confidence that their cases will be decided fairly and in accordance with the law.

In Australia, the judiciary enjoys such independence, bolstered in the Federal Court by the authority and capacity to administer itself. The Court has addressed numerous jurisdictions about the need for and means to promote judicial independence; most notably through assistance given to Vanuatu to create a system of self-administration, but also through the Court’s work with judicial leaders in the Pacific Region to address the challenges and barriers to judicial independence.

Codes of Judicial Conduct provide guidance to judges on issues of integrity, independence, diligence, impartiality, permissible extra-judicial activities, and the avoidance of impropriety or even its appearance. The Federal Court has assisted the Republic of the Marshall Islands, Solomon Islands, Kiribati, Niue, Tuvalu, Samoa and Vanuatu to develop their own Codes based on internationally recognised principles.

Materials: Review of Guidance on Judicial Conduct Toolkit, developed as part of the Pacific Judicial Development Programme (PJDP), is available for download.

Maintaining an accountable and transparent legal system is essential to retaining the confidence of those for whom the system administers relief. There are two types of accountability. First, judges are individually accountable, including to the parties, by reasons for their decisions. Secondly, the Court, as an institution, in all its aspects, is accountable to the public. Judicial accountability is the direct result of being the subject of scrutiny enabled by transparency. The Federal Court has worked with Indonesia and countries in the Pacific Region to improve various facets of judicial accountability and transparency through the ongoing collection of court performance data and knowledge exchanges.

The Court has developed and implemented Leadership and Change Management projects with Indonesia, Myanmar and Papua New Guinea, which are designed to equip leaders with the skills, knowledge and approach necessary to identify, prioritise, plan, implement and sustain their court reform objectives and change management capacity. The Court’s programs have addressed key areas such as capacity building, relationships with government stakeholders, judicial leadership roles and responsibilities, and interagency communication and coordination.

Materials: Project Management, Judges’ Orientation and Trainer’s Toolkits, developed as part of the Pacific Judicial Development Programme (PJDP). The Leadership and Change Management Toolkit will be available for download shortly. 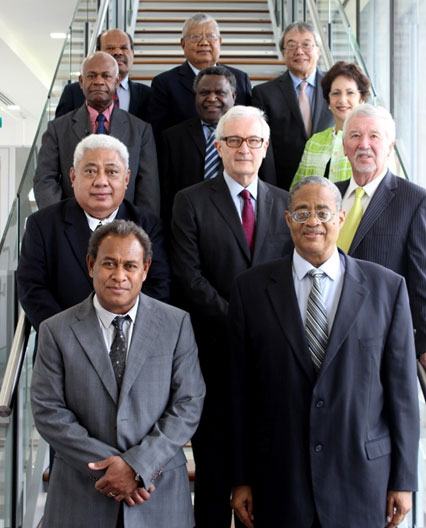