The Federal Court of Australia entity has four programs: 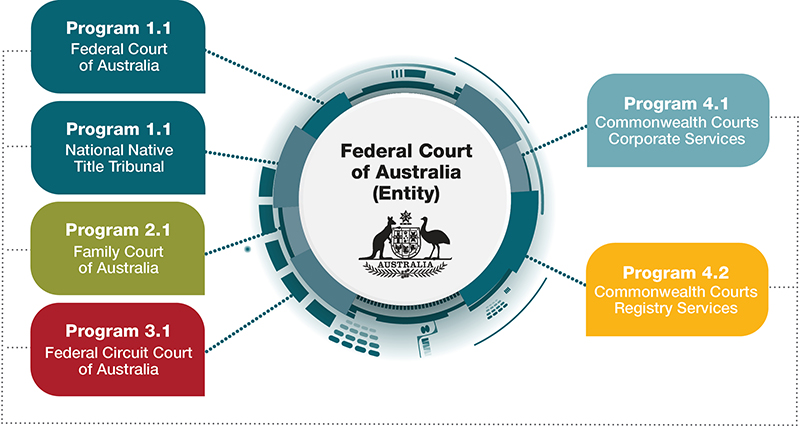 The Federal Court is a superior court of record and a court of law and equity. It sits in all capital cities and elsewhere in Australia from time to time. The Court’s jurisdiction is broad, covering almost all civil matters arising under Australian federal law and some summary and indictable criminal matters.

The Court’s workload is organised by National Practice Areas and, where applicable, sub-areas based on established areas of law.

Since July 2012, the Federal Court has had responsibility for corporate administration of the National Native Title Tribunal, however the Tribunal remains an independent body established by the Native Title Act 1993.

The Native Title Act 1993 (Cth) established the National Native Title Tribunal as an independent body with a wide range of functions.

The Native Title Act is a special measure for the advancement and protection of Aboriginal peoples and Torres Strait Islanders and is intended to advance the process of reconciliation amongst all Australians.

The Tribunal has functions in connection with future acts as defined in s 233 of the Native Title Act. It also assists persons involved in proceedings under the Act, including dispute resolution.

The Family Court is a superior court of record and a court of law and equity, established by Parliament in 1975 under Chapter III of the Constitution. The Family Court operates under the Family Law Act 1975 (Cth) and through its specialist judges and staff, assists Australians to resolve their most complex family law disputes.

The Family Court exercises original and appellate jurisdiction in family law, including in a number of highly specialised areas. At first instance, the Court determines cases with the most complex law, facts and parties, and hears cases arising under the regulations implementing the Hague Convention on the Civil Aspects of International Child Abduction.

The Family Court maintains registries in all Australian states and territories except Western Australia.

The Federal Circuit Court sits in all capital cities, selected major regional centres, and also circuits to a number of regional locations. It deals with a high volume of matters and delivers services to regional Australia through its regular circuit court program.

The shared corporate services body is managed by the Accountable Authority, which is the Federal Court CEO and Principal Registrar. The Accountable Authority consults with the heads of jurisdiction and the CEOs of the Family Court and Federal Circuit Court in relation to the performance of this function. Currently, the Family Court and Federal Circuit Court share the same CEO. Details relating to corporate services and consultation requirements are set out in a memorandum of understanding.

Corporate Services generates efficiencies by consolidating resources and infrastructure, streamlining processes and reducing duplication. The savings gained from reducing the administrative burden on each Court and the Tribunal will be reinvested to support the core functions of the entity.

In 2019–20, the registry services functions for the Federal Court, Family Court and the Federal Circuit Court were amalgamated into a new program under Outcome 4 known as the Commonwealth Courts Registry Services.

This initiative provides the Courts with the opportunity to shape the delivery of administrative services across the entity in a more innovative and efficient manner.

A focus on maximising registry operational effectiveness through streamlined structures and digital innovations will significantly contribute to the future financial sustainability of the Courts.