Email Updates Register to receive daily court lists by email soon after they are published. Subscribe Future Listings Find hearing dates & times for all current matters in the FCA and FCC. Go to Federal Law Search
Library Annual Reports SeminarsPapers of seminars & other events held in the Federal Court
Judges' Speeches and Papers Current and former judges, including Welcome and Farewell ceremonies Videos GlossaryGlossary of legal terms
Judgments About the judgments collection, including FAQs
I am a Party -
Information for Litigants
Jury Service
I am a Practitioner I am a witness I have been Subpoenaed
Guides
Online Services
You are here:

On 14 August 2002, a Memorandum of Understanding between the Court and the Australian Maritime Safety Authority ("AMSA") was formally entered by the Chairman of AMSA, Dr Kenneth Moss and the then Chief Justice, the Hon Michael Black AC. 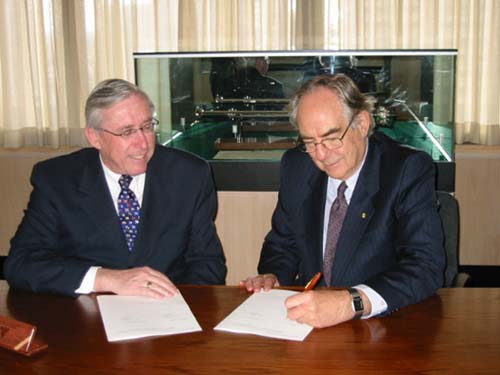 Memorandum of understanding with Australian Customs and Border Protection Service

On 9 October 2013, a Memorandum of Understanding between the Federal Court of Australia and the Australian Customs and Border Protection Service (Customs) was formally signed by the Principal Registrar of the Federal Court, Warwick Soden, and the Chief Executive Officer of Customs, Michael Pezzullo.  The Memorandum outlines the protocol for Customs to provide its officers to be appointed as a Marshal for the purpose of executing an arrest of a ship or property, as required.  The short term appointment of local customs officers will address the difficulties in conducting arrests in remote locations and work health and safety issues associated with these arrests.  The Federal Court’s employees appointed as a Marshal will presently continue to undertake arrests locally but in the medium to long term Customs may also be used for local arrests.

Memorandum of understanding with Ports Australia

For further information about commencing a proceeding or applying for an arrest warrant, please contact a judicial registrar of the Court.

For further information about the conduct of an arrest once a warrant is issued, or about a ship or property that is in custody, please contact the admiralty marshal responsible for the arrest. This will usually be the Marshal in the Registry where the ship or property is located.